The JIPMER colleges in India namely JIPMER, Puducherry and JIPMER, Karaikal have an intake of 200 students in undergraduate MBBS courses. The JIPMER Kariaal offer 50 seats since the year 2016. The admission is done through the JIPMER entrance examination and on the basis of merit-cum-choice of the candidates.

Jawaharlal Institute of Postgraduate Medical Education and Research, Puducherry (JIPMER) was established in 1823 by the French government as an institute offering research and allied medical courses. The institute was declared as the  “The Institute of National Importance” by the Indian Government under the Parliament Act.

The JIPMER colleges in India aims to provide a high-quality learning environment for those undertaking taught and research degrees awarded by JIPMER in the Faculty of Medicine. Teaching and Training for M.B.B.S. Degree at JIPMER are focused on health improvement, disease prevention, and cure. All medical graduates have to meet the core outcomes set by the Medical Council of India (MCI).

Being Institute of National Importance, JIPMER is not affiliated to any university. It awards its own degrees. Offering a number of medical and paramedical courses at the undergraduate and postgraduate levels. Admission to the courses are made on the all-India basis and strictly on the basis of merit through entrance examinations.

The JIPMER score accepting institutes or the JIPMER MBBS Colleges in India are:

The Jawaharlal Institute of Postgraduate Medical Education & Research (JIPMER), Puducherry is a medical college in India. It is located at the capital of the union territory of Puducherry, in southern India.

The JIPMER, Puducherry is both an educational institute that imparts undergraduate, postgraduate medical training, and a working hospital providing inexpensive medical care to a large number of patients. It is in the direct administrative control of Directorate General of Health Services (DGHS), Ministry of Health and Family Welfare, Government of India. 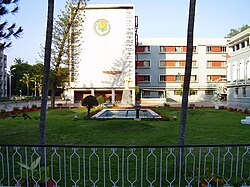 Intake- 150 Students in the undergraduate degree programmes and 200 for the postgraduate programmes.

Facilities:  The JIPMER Academic Centre, new hostel complex for undergraduates/postgraduates, a common wellness center including a gymnasium, dining hall, and other amenities.

The Karaikal campus of JIPMER institute is one of the two JIPMER MBBS colleges in India established by the Ministry of Health & Family Welfare, Government of India. JIPMER Karaikal is in the developing stage. The institute started its tenure of imparting medical education in the year 2016. It will work on the JIPMER Puducherry model of teaching and education.

The campus is in the initial stage of construction and does not provide good medical practice to students due to lack of a proper hospital. The highlights of JIPMER Karaikal are:

The government plans to develop JIPMER Karaikal in the next couple of years.

The JIPMER being the Institue of National Importance follow the government rules and regulations of education and fee structure.